Class 2 and Class 4 National Insurance Contributions are paid by self-employed individuals (this means sole traders, not directors/shareholders of limited companies).

An illustration of a director shareholder that takes a director’s salary up to the primary threshold and the remainder of the basic rate band for income tax as dividends is set out below to demonstrate the changes. 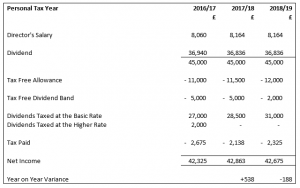 The lifetime ISA will come in this April which allows younger adults to save £4,000 each year and receive a bonus of up to £1,000 a year on these contributions, which can be withdrawn tax-free to put towards a first home or when they turn 60.

To support UK investment, the government will make administrative changes to the Research and Development Expenditure Credit to increase the certainty and simplicity around claims and will take action to improve awareness of R&D tax credits among SMEs. 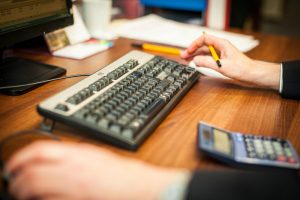 There will be a business rates revaluation which takes effect in England from April 2017. In addition to the transitional relief which was announced in November 2016, the government will provide £435 million of further support for businesses facing significant increases in bills from the English business rates system.

In respect of Insurance Premium Tax (IPT), the government will legislate to introduce anti-forestalling provisions and increase the standard rate of IPT to 12% from 1 June 2017, as announced at Autumn Statement 2016.

Hammond announced that the government will provide an extra year, until April 2019, before Making Tax Digital is mandated for unincorporated businesses and landlords with turnover below the VAT threshold. This will provide them with more time to prepare for digital record keeping and quarterly updates. The government will also consult on the design aspects of the tax administration system, including interest and penalties, with the aim of adopting a consistent approach across taxes. This will simplify the system for taxpayers.

If you would like to read further into Hammond’s budget, including the areas of UK productivity, public services and markets, financing, budget decisions, government spending and the UK economic outlook the full budget document can be found here.

However, mortgage interest tax relief will gradually be cut back to 20% between 2017 and 2020.